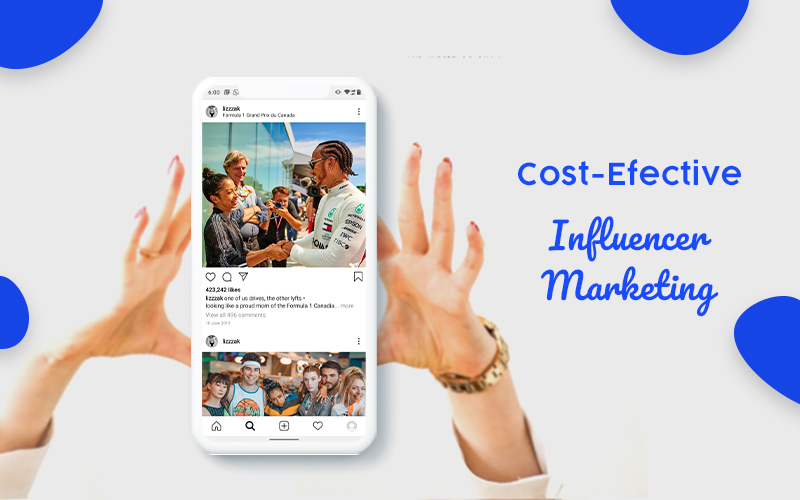 If we think about influencer marketing, we’ll get to know that we can’t remember the time before the word influencer was invented. Whether we love this phenomenon or hate it, this particular thing has taken over different aspects of the language.

This word became highly popular for the recognition of an individual unique or well-known among others. However, today the definition of “influencer” has become more complexed due to the exposure of Instagram.

If we divide the type of influencers in terms of benefits and costs, they’ll break into four categories. The brands or individuals need to know about the exact definition and features of those types, especially when working with influencers to build their social media presence. Here are the four types of influencers:

Macro: between 100K and 1 million followers

Micro: between 10K and 100K followers

Nano: having 10K or fewer followers

Why should you care about the followers?

As we step into 2020, the influencer marketing industry through social media has reached a milestone of $10 billion. It is crucial to understand the actual definition and worth of each type depending on the followers.

You need the support of followers to take your brand’s fame upward, but at the same time, you have to take cost-effective measures to maintain your budget. Coping up with the campaign strategy can make or break your entire brand. That is why it is essential to use the right influencer for your brand within the budget.

In this article, we’re going to describe some of how important it is for brands to carry out cost-effective marketing using nano and micro-influencers.

Choosing a Cost-effective influencer for Marketing

Before going any deeper into the two well-balanced influencer levels, we have to learn about the others as well. Let us explain when and why you need these:

Mega influencer: If you need to enhance the visibility of your brand or just want to raise some awareness regarding your product by your influencer marketing, then this one for you. When choosing a mega influencer, there’s no restriction in terms of budget.

Macro influencer: If you need to target a particular group of audiences while reaching others side by side, then pick a macro-influencer. Some macro-influencers have more precise and increased engagement than others, so analyze your ROI as you sign up.

Micro influencer: If you want to increase subscription, leads, and conversions among the particular type of audience, then go for a micro-influencer.

Nano influencer: If you have a brand working locally, then you must choose a low marketing strategy as you must be having a limited budget. However, the low budget doesn’t mean less work; you will be needing increased conversations and leads to the brand or product. To ease all such queries, choose a nano influencer.

Micro-influencers are one of the most typically used types of influencers on Instagram nowadays. This type is generally popular because of its multiple benefits and cost-effective behaviour. You can easily maintain your budget by continually increasing the number of leads and conversions. The micro influencer is the category where the influencer has followers ratio from 10,000 to 100,000 followers.

This category is said to be the smaller counterpart of macro-influencers and the only thing differentiating them is the reach-size. Micro-influencers are however more specialized than the macro. That is the sole reason why many brands rely on it with their highly engaged, relevant, and loyal audiences.

These social media influencers are more likely to transcript a relevant number of conversions and lead by engaging the audience. If the targeted market of the brand matches with the range of a micro-influencer, then this partnership will be worth exploring.

Many micro-influencers can be said to have specialization in any specific niche. They are opting to share the content related to that niche, and that practice is more credible to the brands.

After getting linked with the relevant micro influencer, you have to invest less in the required field. This can make the partnership more appealing to the brands.

According to many surveys held worldwide, the micro-influencer category gathered more engagement than macro or mega influencers. The reason behind the higher engagement rate is the connectivity of the audience; people can relate to the content of micro-influencers more and get inspired by them.

The fascinating advantage of micro-influencers is that they can convert their fresh leads into their customers and subscribers. All this can only be possible due to the level of trust built between them and their followers.

Different brands have the opportunity to work with multiple influencers at the same time only because of the lower cost and more niches provided by micro-influencers.

Brands usually work with micro-influencers to get maximum results depending on the type of campaign they’re carrying out. But, a successful campaign requires more time and effort. Not only that but research and communicating to build a network is also crucial. Micro-influencers can handle it all, giving you a weekly briefing, review cycles, etc.

You may find some of the micro-influencers who don’t consider Instagram as their full-time job. They usually juggle with their schedule and compromise with the quality of work. You can avoid this problem with the necessary contract and revisions.

If your goal is to create brand awareness, then it is essential to get associated with a micro-influencer, but for higher reach go for macro instead.

Now, the second pocket-friendly category of the influencer range is the nano influencer. These are the Instagrammers having 10,000 followers or less than that working locally for the cause.

If you have a friend or family member of social media platform who is popular among your circle for his social presence, then he’s a nano influencer. They are known for creating quality content achieving quality remarks and consistent engagement regularly. Individuals influencing within the local community are nano influencers.

People may interrupt saying their reach is low, and they usually have a lesser influence among the people. However, the best thing about it is the community of people attached to it are held in a strict knot keeping it linked severely. They are updated with most of the news about the follower, and the intimacy level between them can take your brand or campaign on massive levels of success.

People mostly believe that word of mouth from an intimately known person is more reliable than that of a celebrity. You are more likely to go on a trip suggested by a friend than the one aired in an advertisement.

As we are digging deeper into the digital world, we get to know that advertising and marketing world is becoming disillusioned, thus creating unrelatable content. Nowadays, people want to know the experiences of the ones of their class, category of age to which they can relate. They want something which they’re not getting on any celebrity Instagrammer”s account.

The engagement ratio of nano influencers is more likely to be highest when compared to other social media influencers.

For people starting a small business or a start-up, nano influencer is a great way to deal with marketing. The best thing about it is the lowest cost of being healthy for your pocket.

Several nano influencers know their followers personally so you can quickly get a guaranteed response related to the product and brand you’re promoting and will be highly received due to credibility.

As you know, people usually trust something coming out from their family more than prominent Instagrammers. It means that the nano influencers are more likely to have more significant conversion rates than macro or even mega.

If you’re just starting and your office location is similar to brick-and-mortar, or you need promotion for your local event, then go for a nano influencer. The partnership with nano influencers will benefit you to organize your location, building hype and generating positive words among the community locally.

If the main goal for you to be associated with the nano influencers is to create brand awareness, then it is highly crucial for going for other options too as for nano influencers the reach is quite restricted.

Nano influencers aren’t the right option if you are looking for branded content. That’s the reason why it is integral to communicate with the goals of the campaign before signing a contract to make sure the result can match the identity of the brand

How Do I Reach Out to Micro & Nano Influencers?

Due to multiple ways of getting connected to people, all thanks to social media platforms. It has become a lot easy to get associated with nano or a micro-influencer. You can immediately compare and build a better relationship with your targeted audience for recognition of your brand.

For people who regularly use social media, they’ll be aware of many Influencers within their reach. But, even though you don’t know any, many tools can help you to search for people having the most authentic following to engage traffic relevant to your brand.

The tools you can use to reach out right influencers related to your niche within the budget are the simplest. These are made specifically for the brands to highlight amazing nano and micro-influencers who are putting consistent efforts in building their image. These tools have database programs allowing the brands to view the influencers depending on the size and category of the audience followed them.

You can find the relevant influencers within your network efficiently by using these tools. The load of work will also be reduced, and you can pay attention to other details.

If you’re someone in need to start a brand from scratch and have time and motivation to go through multiple websites, then go for it manually. You can find your desired micro or nano influencers easily by searching up through advanced searches on Google or other search engines.

Google: You can search through advanced search operators for identifying the users mentioned sponsored or influencer on their bio or posts. These are usually the sign or a sort of green flag which shows they’re up for collaborative opportunities.

Third-Party Databases: Usually, the influencer marketing platforms are straight-up databases of multiple social profiles. If you are considering the starting point of your brand development, you must know that some worthy opponents aren’t even registered in the databases. So, before reaching out to them, be ready to get a surprising response.

Other than the tools or manual research, many different platforms are offering updated databases allowing you to organize your strategies related to marketing, all through a single account. However, you’ll need to set a minimum budget to implement these strategies based on size, niche, platform, and market.

Before working with social media influencers, there are some things to consider. You must be fully aware of the types as it can result in cost-effective ideas and easing your work.

You have to ensure the implementation and structure of goals if you want to make the best out of your influencer partnership. You can shortlist your desired and eligible social media influencers, and move forward by strategically researching the work done by them previously.